Peppers are amazing creatures. Although supermarkets tend to sell very few kinds — mostly the big “sweet” bell peppers that at best have nice crunch and color but not a lot of taste, many different kinds are found around the world. The differ not just in size, color, and amount of hotness, but also in other qualities of taste. The peppers that are used on Oaxaca for traditional dishes such as mole are different from the ones used in the Basque country or in India or Jamaica or Italy … or anywhere else!

We have expanded the range of peppers we grow — we have had fund searching out seeds from different regions of the world to grow the peppers that are used locally for many different world regional dishes.  We specialize in range from sweet (lacking the chemical capsaicin that creates the “hotness”) to medium hot peppers. We don’t grow the ones that will burn your face off.

The “hotness” (burning qualities) of peppers is widely measured Scoville Scale, developed in 1912 by Wilbur Scoville, which measures the pungency of peppers in terms of its number of SHUs (Scoville Heat Units) from 0 (a sweet pepper with no capsaicin) to millions (we’re not going near that). So we clue you into how hot a pepper is by telling you the rough number of SHUs. Note that individual peppers of one kind can vary a lot, and the hotness depends on whether it’s dried, fresh, cooked, or what. So, for example, jalapeño peppers, which are familiar and popular in the U.S., are listed as 2,500-8,000 SHUs.

We will be selling peppers, largely through Gilmanton’s Own Market, when they ripen — probably no earlier than August. We can also take special orders through restaurants. We will also sell seedlings if you order them in advance by the end of March. 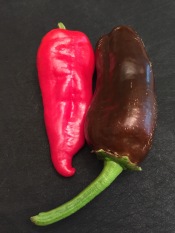 Some heirloom pepper seedlings in the spring (May-June)

Great varieties of heirloom peppers in the summer (August-September)

Here is our current collection of peppers — we expect to grow these again next year.